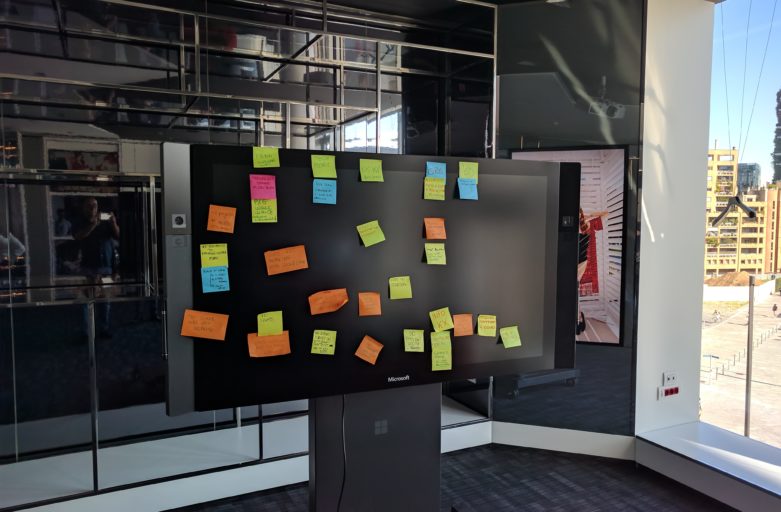 This spring we had the chance to organize our first CollaBoard Roadshow. There are a lot of events out there throughout the entire year but, with the help of Microsoft, we decided to go across Europe to showcase the Surface Hub and CollaBoard. We targeted our efforts at first to big enterprises, our primary customers, and to meet important Surface Hub Resellers in Europe. Our CollaBoard Expert traveled around Europe visiting our CollaBoard users and Surface Hub owners in UK, Germany, France, Italy, and Switzerland.

The Roadshow was pretty exciting for us as it gave us the chance to meet a lot of customers and Surface Hub Re-sellers and we could feel there was a lot of excitement around the device and our collaborative solution for it. But, as we expected, the reality sometimes didn’t match what our vision was (and is).

These trips also included attending some other events which we already covered in one of our previous blog posts.

In several Companies, they use the Hub as a whiteboard, for miracasting and for conference calls over Skype 4 Business or other conferencing tools. In these modern workplaces we visited, flip-charts and beamers were not used and were often not present at all. The Hub completely substituted them. Some companies started to integrate the Hubs more in their business processes and use some specific Apps for that. In this blog post we describe our experiences “on the road” regarding the new way of working the Surface Hub brought with itself.

Heading for the next level of Collaboration

Most of the Companies we visited were “early adopters” of new cloud-based collaboration solutions. They believe that with these new technologies people can be more productive and Companies can survive the digital transformation by adapting to these technologies and innovate with new business models.

While some Surface Hub were placed in normal meeting rooms, we found several devices in creative workplaces with beautiful furniture where people could relax, have fun and be creative together. The Surface Hub was fitting very well in these spaces. In such innovative spaces people preferred to have the Surface Hub on a roll-stand to move it around as the furniture can be moved also very easily to adapt the space to the kind of sessions people were having there.

We visited some Companies that evaluated a lot of collaborative tools and due to these evaluations, they knew exactly what they wanted from a digital collaboration solution for virtual meetings, creativity sessions and digital workshops.

It was very interesting to show to these people CollaBoard and having conversations about collaboration with new technologies on a very high level.

But, as mentioned above, we also experienced offices in which the Surface Hub was used just as a video-conferencing tool. And the Hub can do much more than that so we explained the value of the hardware they got or they intended to get.

We had the pleasure to meet some of the top 500 Companies in Europe and specifically in UK, Germany, France, Italy and Switzerland. And there were a lot of differences concerning the way the Surface Hub was intended to be used. One Company was more focused on digital workshops as it was one of their core business and CollaBoard, in conjunction with the Surface devices, was the perfect solution for them. One other Company was more interested in doing meetings locally and remotely were they had the Hub in different meeting rooms across the whole offices. In this particular case, the Hub was perfectly integrated into their Office365 environment and, as they had a lot of subsidiaries across the world, they wanted to take advantage of a real-time collaborative solution when it comes to working together. The primary and most valuable feature, for most of them, is the ability to work remotely, not only across teams or business units within the same Company, but also with customers because CollaBoard runs smoothly no matter which network or domain you are in.

There were although some Companies that were still collaborating “the old way” meaning they had sticky notes all over a whiteboard or even on the windows’ glasses! One day, when we entered a meeting room, we were a bit “shocked” to see what you can see below (and, to be honest, it was kind of funny 😊) The possibility for them to have a look at a brainstorming session outcome after-the-fact was truly a breakthrough for them.

And if you think about it, it makes a lot of sense: instead of one person taking pictures or screenshots of their work, everything is cloud-based, Azure to be specific, so that helped them a lot to also catalog their sessions for later consumption.

We’ve gotta say the Roadshow was really successful as it was not only very useful for our customers or potential ones, but useful for us as well as we had the chance to gather a lot of feedback and see employees in action using CollaBoard.

In the past few months we did a lot of case studies so we could monitor how people were using CollaBoard in their environments. But seeing it first-hand, especially for the new customers, was very helpful for us as we collected even more feedback and gave us the chance to fine-tune some features we didn’t think of in the past. We also visited several Universities and we realized more than ever how much CollaBoard can bring the collaboration to the next level in these environments.

Think about it: students and teachers working on the same project/paper, discussing the single “cases” by having students contributing with their ideas, their papers, their notes and the ability to bring all together in one single canvas. Amazing !

As for all of these, we decided to deliver another CollaBoard Roadshow, touching more Countries than ever before and including other Continents as well, in September/October timeframe.

Would you like us to pay you a visit so to experience the innovation that brings the Digital Workplace? Let us know in the comments or write us at collaboard (at) ibv dot ch !